For most of us, reading the Harry Potter series did not give rise to questions of economics (and thankfully so). Nevertheless, whilst J K Rowling has been repeatedly criticised for a lack of a functioning economy and governmental structure in the Potterverse (yes, this is what we’re calling it), the world of Harry Potter has no shortage of interesting economic events to discuss. In fact, such a disregard for the economic situation in the Potterverse by the author can actually make things more interesting. We’ll look at the answers to three key questions which will increase how interesting you are to people at parties (p < 0.85):

What do you mean you don’t have a full working knowledge of the economics of the Potterverse?

Magic in the Potterverse is complicated. It’s unclear how it really works: though learned by wizards and witches at school, short of potions magic does not have any prerequisite to its use besides education. There appears to be some degree of natural ability available to do magic – Dumbledore being heralded as an exceptionally talented wizard and Severus Snape inventing curses (Sectumsempra) whilst still at Hogwarts – yet what quite ‘allows’ a more talented wizard to perform more difficult magic is not expounded.

Nevertheless, the possibility of magic that comes ‘from nothing’ (besides a fairly long investment in human capital at a wizarding school) raises some interesting economic consequences. The most problematic of these is transfiguration. Transfiguration, for those who shamefully do not remember, involves transforming one object into another. Gamp’s Law of Elemental Transfiguration governs this area of magic. Unfortunately, we’re not told what this law is, but we are told some exceptions:

By implication, we can also conclude that you cannot transfigure:

There’s not much else to be said on this front: the long and short of it appears to be that completely functional necessities cannot be transfigured, nor can items which are too big. Transfiguration is clearly limited to things which are relatively simple – though there is scope to suggest that great wizards and witches would not be so limited. What does this mean economically?

Time to do the economics.

Let’s firstly make the simplifying assumption that things relative in size and value can be transfigured into each other (we need something to work with here). We can’t go from cardboard to gold, but we can go from cardboard to grass or paper or rubber ducks. This would create, in essence, several ‘networks’ of transfigurable items that can all be transfigured back and forth into one another once you learn how.

The result? Instead of being limited by the supply of one of the items in a market, as we are in reality, wizards and witches are confined by the aggregate pooled supply of all of the items in the network. The price of all of the goods would fall dramatically, to the price of the lowest obtainable good in the network. If cardboard was the cheapest, everything else would be the same price, as you can simply transfigure it into what you need.

It doesn’t end there! Of course we’re going to have a convenience premium – someone has taken the time and effort to transfigure the item so I don’t have to, and must be compensated for that. Networks with harder transfiguration spells would attract higher premiums if there was a limited supply of people who could perform the spells. This is all fairly standard.

We may also see substantial negative price shocks due to increases in technology. Recall that technology is defined as ‘something that more efficiently combines labour and capital into output’. Imagine a wizard invents a perpetual spell that automatically cuts down cardboard trees and makes them into boxes (I assume this is where cardboard comes from), or makes cardboard trees grow from saplings to fully grown instantly. This increase in technology means that the price of cardboard would dramatically fall, and with it, the equilibrium price of the entire network.

This could be viewed as a good thing – the market rewards innovation massively as the reaches of a single innovation can be enormous, depending on the transfiguration network available. We can take this further: what if networks increase due to the invention of new spells? What if networks overlap somewhat, with one or two key products ‘linking’ the networks? I’ll leave you to ponder the economic minutiae of this completely fictional universe as exam procrastination.

A common feeling, I’m sure.

Despite its ability to track all underage use of magic and unilaterally impose rules and regulations at the behest of its unelected employees, the Ministry of Magic does not appear to have much in the way of fiscal or monetary authority. Rather, control of money is entirely outsourced to the goblins who run Gringotts bank – a monopolistic entity that keeps the wizarding financial system in the 19th Century by refusing to take up online banking or a mobile app, and instead forcing its customers to travel via death defying cart to enormous vaults guarded by dragons and disguise-bamboozling waterfalls.

The fan fiction Harry Potter and the Methods of Rationality (please don’t judge me) suggests that the goblins actually do control the money supply, by converting precious metals such as gold and silver into wizarding coinage, Galleons and Sickles. 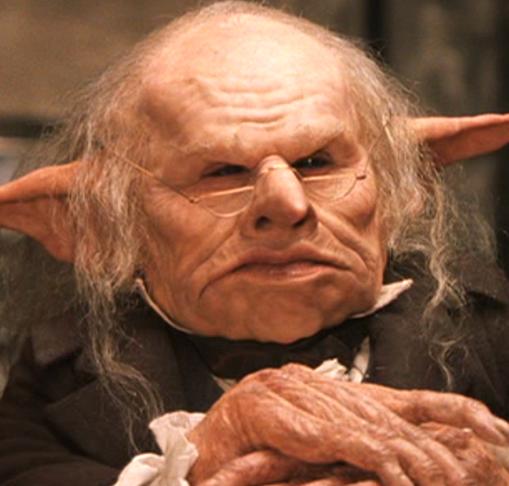 And by the look of this fella, pocketing a handsome sum for themselves.

What does this mean?

Well, the money supply being controlled by the population is likely to be problematic. It is entirely possible that a Death Eater or other unscrupulous type could make it their goal to plunder enormous amounts of muggle gold (or wizard gold, if easily taken), periodically make trips to Gringotts in order to turn the gold into currency, and flood the wizarding economy with Galleons. With no greater denominations available (unless a platinum galleon were to be invented, or something) the resulting hyperinflation would mean that wizards and witches would be unable to buy cloaks for their backs, let alone fight the Dark Lord.

This brings us to a related problem with tying a currency to a commodity – in this case a gold (and silver) standard. Fluctuations in short term sentiment, i.e. changes in money demand, cannot be neutralised by a quick increase in money supply from a fiscal authority. This causes significant volatility in inflation. Further, as Keynes argued, if gold stocks are sparse then there is a risk of deflation, something we definitely don’t want.

But there’s a problem. We said before that increases in transfiguration tech would cause prices to fall, but we just concluded that the commodity currency will cause prices to rise. What gives?

I can’t reconcile these two discrepancies. To me, it seems that both sentiment-induced inflation and technology-network-based deflation are possible in this theoretical version of the Potterverse. Most likely, given wizards and witches are an inherently traditional bunch, prices would remain relatively fixed via goodwill for long periods of time, and it appears unlikely that they are financially savvy enough to appreciate decreasing marginal costs due to increases in technology. Maybe a price floor would be implemented. Maybe a civil war will break out. Maybe capitalism is broken and this is the socialist utopia we’ve been waiting for.

Socialist… utopia? Isn’t that an oxymoron?

Take note if you ever end up in Diagon Alley: a cheeky arbitrage opportunity arises in the Potterverse also. Take Galleons, melt into gold, sell on the muggle market, buy silver, go to Gringotts and get them made into Sickles, exchange for more Galleons than you did before, repeat. If the price of the gold in one Galleon exceeds the price of the silver required to make a Galleon’s worth of Sickles (say that with a mouthful of mushrooms!), then the arbitrage opportunity allows the budding investor to exploit the two markets and make a fortune. This would mean that in the muggle economy there would be a sudden unexplained increase in the supply of gold and demand for silver, converging at an equilibrium where the ratio of the prices of gold to silver is 1 to 17 (there being 17 Sickles in a Galleon, as you would surely know) and the arbitrage opportunity no longer arises.

This is merely the start of where things could go from here. Even from this short analysis, it’s clear that central intervention is desperately needed in the Potterverse, if not for the sake of witches and wizards then for protection from underhanded manipulation of the muggle economy. Thanks for reading!

Ryan is a fourth year law and economics student who enjoys the study of economics in spontaneous gif format. When not writing articles about economics he can be found at Beltop, where he consumes enough coffee to power a small nation.